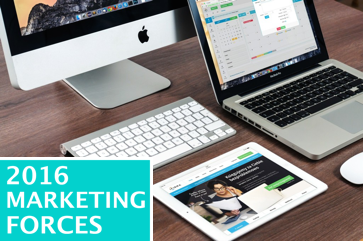 Now that the festive season is over, it’s time to get back to it! So let’s start the new year by taking a look at 5 reasons why 2016 could prove to be yet another incredible year for developments in the marketing world.

So let’s begin on a controversial note - Ad blockers. Ad blockers are becoming an increasingly relevant factor in decision making for organisations when looking at their advertising options. Let’s look at YouTube for example. YouTube generates over 3 Billion video views per day across old and new content which straight away offers incredible potential for exposure across a variety of industries. However, if 95% of these views are preventing the advertisement from being displayed through a third party, could viral marketing be losing its value for money? The consistent and vast increase in traffic could prove to have little influence on organisations if the opportunity for consumer engagement is being cancelled out!

Simply put, mobile user numbers are massively increasing compared to desktop. Looking further at YouTube as an example, which since the end of 2014 has had over 50% of its traffic coming from mobile views, proof that the “fast moving consumer” is very quickly becoming the hotbed target audience for organisations. However, as enticing as it is, the use of advertisements must remain dignified. Like many things in the world, too much too soon - or just too much in general - could prove to be off-putting for many, especially when they didn’t want to see it in the first place!

A picture paints a thousand words - this is true. Logos & imagery create an initial reaction within the mind of a consumer. How do you stand out from the crowd? This is the importance of a first impression. Creating the instant interest and desire is becoming increasingly vital in many industries due to the number of close substitutes, so seal the deal as soon as possible!

Thought provoking content will force people into using their minds & emotions. It can cause subconscious shock within the consumer, suddenly they make that choice they never once thought they would, learning new behaviours and desires from within themselves. Sometimes people just need to be asked the question, even though the answer has been developing within for sometime or in some cases has always been there.

Over the next 12 months, I expect to see these factors prove to be strong forces in marketing operations. It’ll be worth looking back at this article in a year to see how things have really panned out!